Well, simulated space, at least. I spent a chunk of time last week making the most of the annual Star Citizen "free fly", which lets you download and play the game for free the week of Thanksgiving. The game was semi-playable when it was just me, even though the frame rates were appalling: I could get through doors and on and off the in-universe train and eveything. But it felt kind of like walking though a foreign mall by yourself with only enough pocket money to buy a novelty t-shirt. Once you've walked around and seen every shop, there's not really anything else for you to do, when you don't have your own spaceship. Loading in as a member of a party is a lot more fun--you have the chatter of actual people! but you also have even worse frame rates, to the point of getting trapped on the train because the platform won't load until after the train doors have shut again, and if you step onto the platform when it's not there you wind up falling through into the core of the planet. It's a beautiful digital world, but it seems mainly interested in finding bizarre ways to kill you. Which is funny the first few times, but gets frustrating/depressing after a while.

One of the party members very kindly streamed to Discord so I could join them vicariously as they went off planet and explored a gigantic wreck, but it's definitely not the same as being in the same place with everyone, digital or not. Like trying to hang out with the gang via speakerphone. Better than nothing, but something's lacking.

On the other end of things, I spent most of the day after Thanksgiving collecting resources, building a spaceship, and visiting a moon in Empyrion: Galactic Survival. Which is also an early-access "alpha" game, but you mostly can't tell. The hit boxes can be a little janky, and every now and then there's an invisible hole in the ground, but all that means is you're suddenly dropping six feet out of the sky onto a more solid piece of ground. Worse that happens is you break a leg and need to slap on a bandage. And if you just avoid the hole, it's like there's nothing wrong. You don't get that increasing spiral of "the world is slowly disintegrating around me" that seems to happen with some frequency in Star Citizen.

But--it's lonely. There's plenty of stuff to do, but unless you have a server of friends to play with (which I don't), it's just you and the surrounding wilderness and the occasional janky OC trader. At the end of the day I had a nifty space ship and a shiny new base and I'd gone to the moon and back (twice!) and was generally pleased with what I'd accomplished ... but there was no one to share any of that with. A reminder, I guess, that even introverts need other people around in some capacity to be truly happy.

Anyhow, here are pictures of my ~PICO~ Micro Pup "Good Boy", because in-game, automated turret guns are the closest thing you have to a best friend. 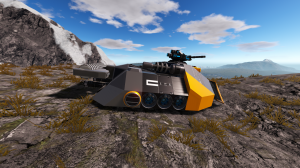 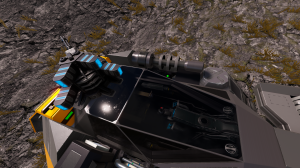