All in all, it's been an interesting week. Not something I'd recommend for fun and profit, but definitely not something to be terrified of, either.

Give thanks, England, to God for victory!


Harry trudged to Agincourt, ankle deep
in mud, and wistful, weary, thought of sleep;
thought of crowns and souls, and old life-goals told
to empty rooms when he was young and brash.
The world still thought him young, beguiled by gold
and trinkets made of names. Names are just ash,
he’d learned, had taught himself, but writ in blood
they thicken, may be set and shaped like mud.
But spilt in love it must be, willingly,
and for a cause near-just (but only near—
for mortal men justice runs crookedly
as any crab). He held his soldiers dear,
like children, brothers, even as he spent
their lives like coin.
.. .. .. .. .. .. .. .. .. The royal French, they bent
the weight of all their bitter scorn on him,
and vowed they’d eat his heart where all could see,
would drive his army down into the grim
shadow of the grave. Surely victory,
they said (and all the world with them agreed)
must go to those with strength, with eager steed
and arms still fresh, not yet worn down like teeth
on sand or bone. The outcome’s known. Why try?
Return your rusty sword to battered sheath,
bow your head and bend your stubborn knee. Why
take the field when you cannot win the war?
But Harry—he went down to Agincourt.

Magnificat anima mea Dominum; | My soul doth magnify the Lord.
Et exsultavit spiritus meus in Deo salutari meo, | And my spirit hath rejoiced in God my Saviour.
Quia respexit humilitatem ancillae suae; ecce enim ex hoc beatam me dicent omnes generationes. | For he hath regarded : the lowliness of his handmaiden: For behold, from henceforth : all generations shall call me blessed.

Quia fecit mihi magna qui potens est, et sanctum nomen ejus, | For he that is mighty hath magnified me: and holy is his Name.
Et misericordia ejus a progenie in progenies timentibus eum. | And his mercy is on them that fear him: throughout all generations.
Fecit potentiam in bracchio suo; | He hath shewed strength with his arm:
Dispersit superbos mente cordis sui. | He hath scattered the proud in the imagination of their hearts.

Deposuit potentes de sede, et exaltavit humiles. | He hath put down the mighty from their seat: and hath exalted the humble and meek.
Esurientes implevit bonis, et divites dimisit inanes. | He hath filled the hungry with good things: and the rich he hath sent empty away.
Suscepit Israel, puerum suum, recordatus misericordiae suae, | He remembering his mercy hath holpen his servant Israel :
Sicut locutus est ad patres nostros, Abraham et semini ejus in saecula. | As he promised to our forefathers, Abraham and his seed for ever.

Gloria Patri, et Filio, et Spiritui Sancto, | Glory be to the Father, and to the Son: and to the Holy Ghost;
sicut erat in principio, et nunc, et semper: et in Saecula saeculorum. Amen. | As it was in the beginning, is now, and ever shall be : world without end. Amen.

Move those feet to the beat....

ursulav's The Hollow Places, and it's a brilliant bit of "reality is too thin and I can see things I should not be able to see and if I'm not careful they'll see me too, and if they do, being eaten is the best I can hope for" horror. Also a love-letter to weird small-town museums and taxidermy. Best way I can describe it is "what if The Magician's Nephew was an adult horror novel instead of a children's fantasy story?" with elements of Lovecraft and a tiny smidgeon of Stargate.

And if you like it, her other horror novels The Twisted Ones and The Seventh Bride are also excellent--the latter with a bit more of a fairy-tale twist, but still plenty of creep factor.


Look, how those steep woods on the mountain's face
Burn, burn against the sunset; now the cold
Invades our very noon: the year's grown old,
Mornings are dark, and evenings come apace.
The vines below have lost their purple grace,
And in Forreze the white wrack backward rolled,
Hangs to the hills tempestuous, fold on fold,
And moaning gusts make desolate all the place.

Mine host the month, at thy good hostelry,
Tired limbs I'll stretch and steaming beast I'll tether;
Pile on great logs with Gascon hand and free,
And pour the Gascon stuff that laughs at weather;
Swell your tough lungs, north wind, no whit care we,
Singing old songs and drinking wine together.

it's crappy, but also the first spontaneous drawing in months, so oh well. 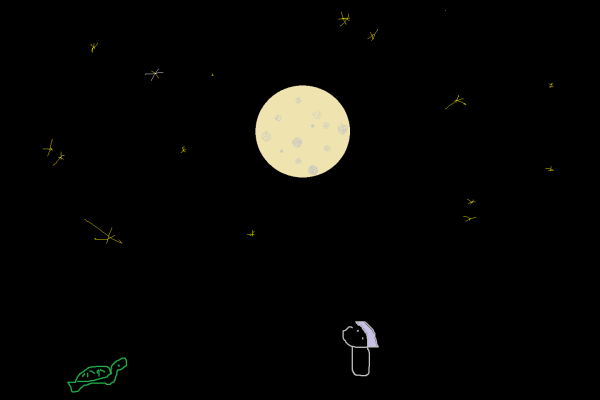 The editing is very, very similar to the Safety Dance video I posted a month or so ago, but I think it works better here--some of the timing and cuts are just spot-on seamless.
Collapse